This is a Series II Lamborghini Espada from 1972, it came from the factory with the quad-cam Bizzarini-designed 3929cc V12 Lamborghini engine that’s capable of 350 bhp – when in running condition of course.

The bad news is that the car is very much a project, and it’s a project for either a wildly talented body specialist or someone who is willing to go to the trouble of re-shelling the car.

The Espada: A Practical Lamborghini

With the possible exception of the Countach, the Lamborghini Miura is arguably the most famous Lamborghini of all time. It’s the car that many point to as the first supercar, and it’s the vehicle that defined the Italian automaker in the 1960s. 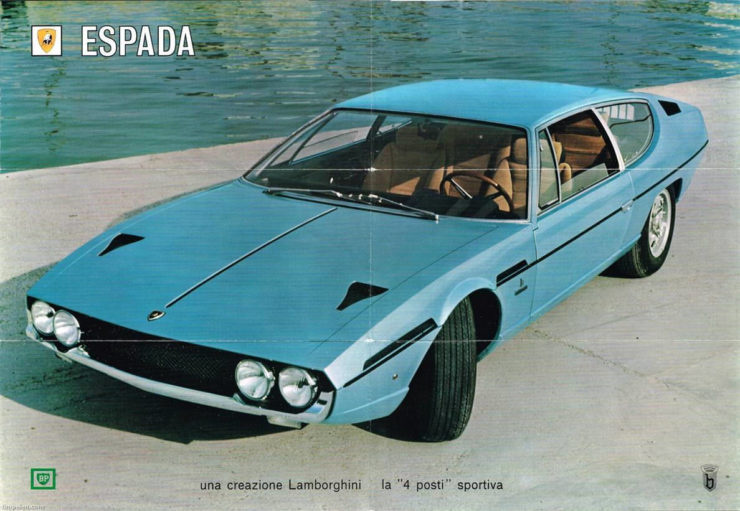 The Espada was one of the more avant garde designs from Marcello Gandini of Bertone, it would also become the best-selling Lamborghini from 1968 to 1978.

Despite the wild success that the Miura would eventually enjoy, Ferruccio Lamborghini wasn’t initially interested in building a high-performance, mid-engined car. He was far more interested in building luxurious GT cars that could whisk their owners at eye-watering speeds across continental Europe in leather-upholstered comfort.

Ferruccio’s love of high-performance GT cars would underpin many of the business decisions he made while heading up Automobili Lamborghini, including the creation of the car you see here – the Lamborghini Espada.

In the late 1960s the halo car for Lamborghini was undoubtably the Miura, however the Miura had only two seats and limited space for luggage. As a result the Espada and Islero were developed.

The Islero was a 2+2 GT car that was the successor to the earlier Lamborghini 400 GT. The Espada was something altogether different, its styling was based closely on two earlier avant garde show cars – the Lamborghini Marzal and the Bertone Pirana which had both been penned by Marcello Gandini at Bertone.

With its long, high roofline, prominent front end, and unusual side profile the Espada stopped people in their tracks when it was first displayed at the 1968 Geneva Auto Show. Any concerns about the car’s design being too radical were quickly allayed – it became the best-selling Lamborghini of the era shifting 1,227 units between 1968 and 1978.

The Lamborghini Espada has a semi-monocoque unibody consisting of stamped steel panels and square section steel tubing, with he exception of the hood wish was made from aluminum for weight saving purposes. 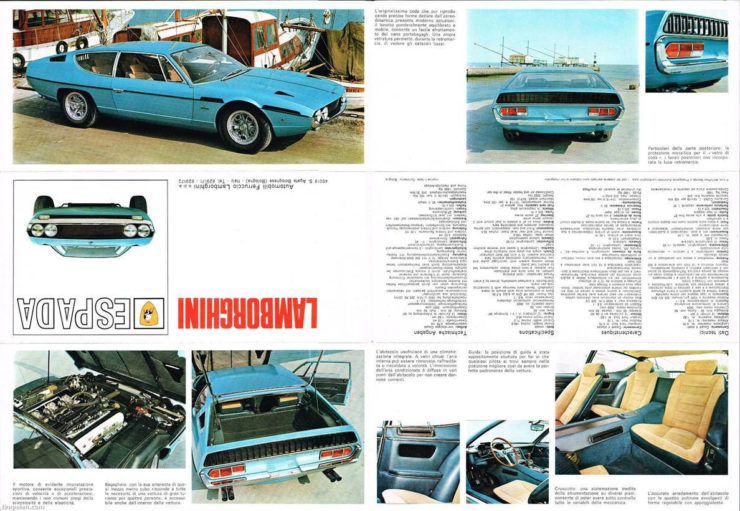 Unlike many of the 2+2 GT cars that were then in production, the Espada could fit two fully grown adults in the back, and it had ample trunk space.

The car was fitted with fully independent front and rear suspension consisting of unequal length double A-arms front and back, with coil springs, telescopic shock absorbers, and anti-roll bars.

Disc brakes were fitted to all four corners, the car had worm-and-peg type steering, with both power steering and air conditioning optional until the Series III cars when they became standard.

For the Espada this engine had a displacement of 3.9 liters (3929cc), an aluminum alloy block and heads, two camshafts per bank, two valves per cylinder, and six Weber 40DCOE side-draft carburetors.

In the Series I Espada this V12 produced 325 bhp, however this was increased to 350 bhp for the Series II and Series III vehicles. Power was sent to the rear wheels via either a 5-speed manual transmission or the optional Chrysler Torqueflite 3-speed automatic transmission that became available later in the model run. 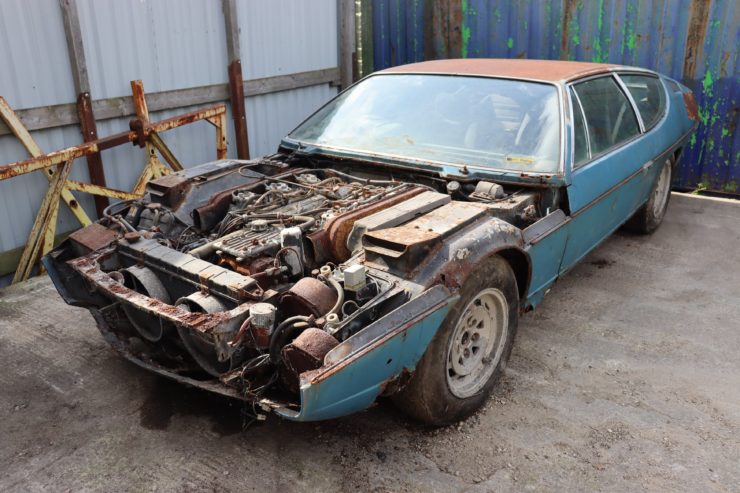 There can be no doubt that this car is a serious project, the amount of rust alone would be fatal for a less valuable vehicle.

The Lamborghini Espada that you see here is a project car to say the very least. It’s clear from the images in this listing that it’s going to require a gargantuan effort to get it back on the road – largely due to the significant rust issues that can be found throughout the car.

There are three main options for this vehicle given its current condition – either it can be used for parts, it could be reshelled, or it could be restored by a team of bodywork specialists who are far better at welding and sheet metal fabrication than I’ll ever be. 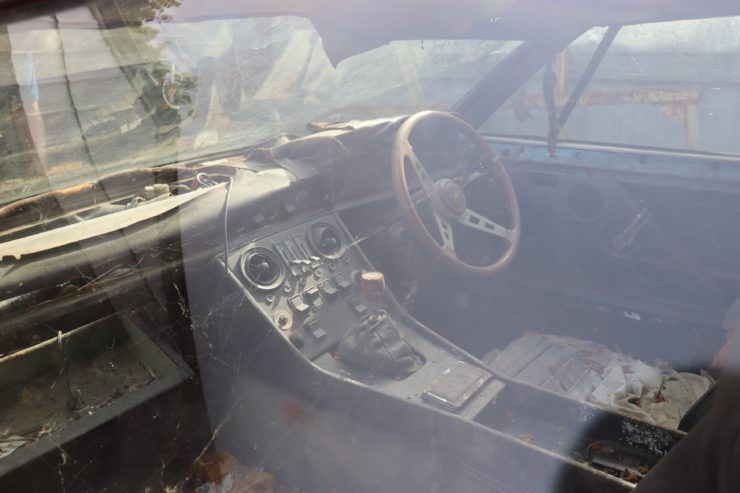 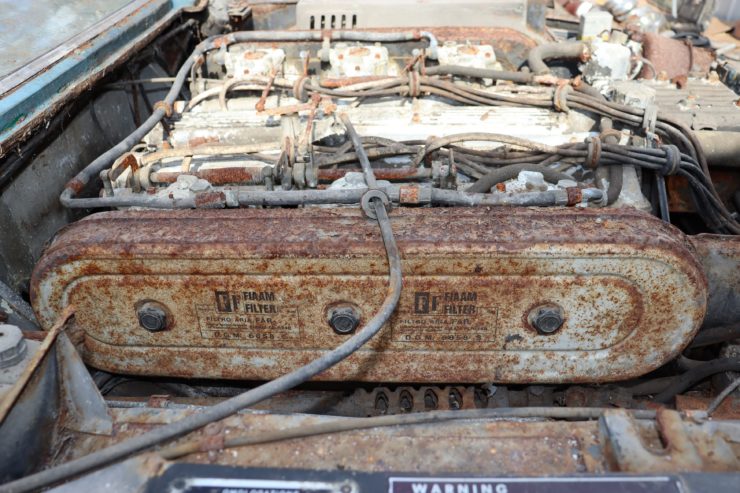 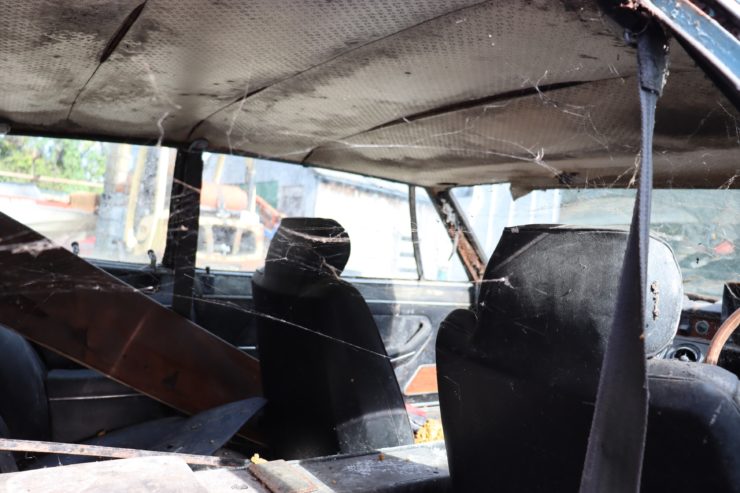 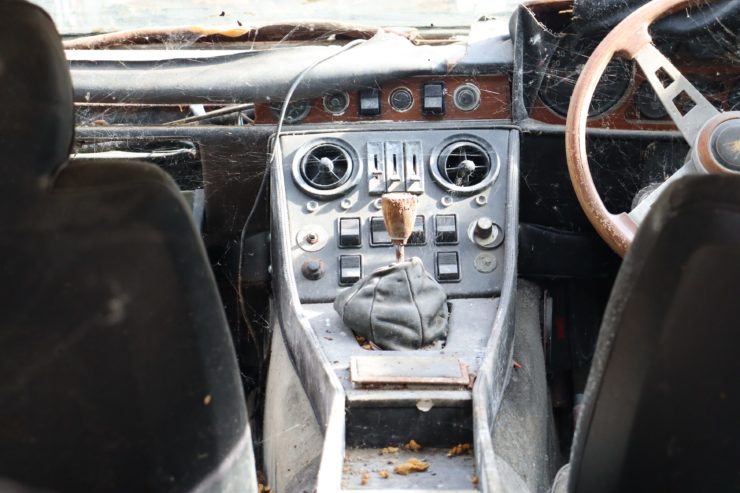 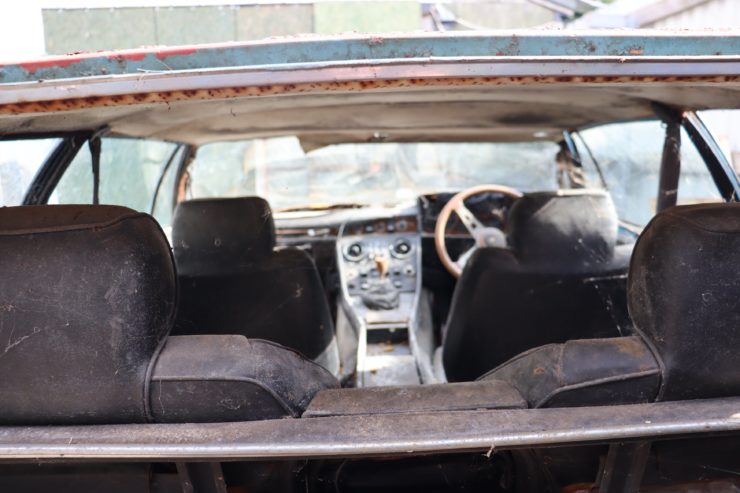 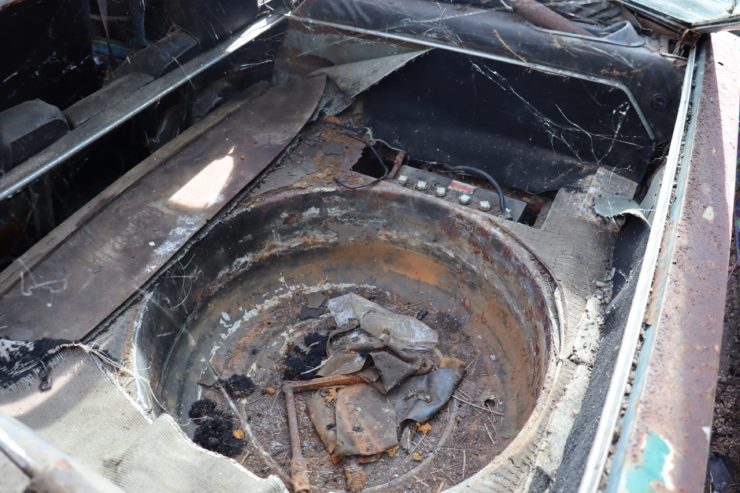 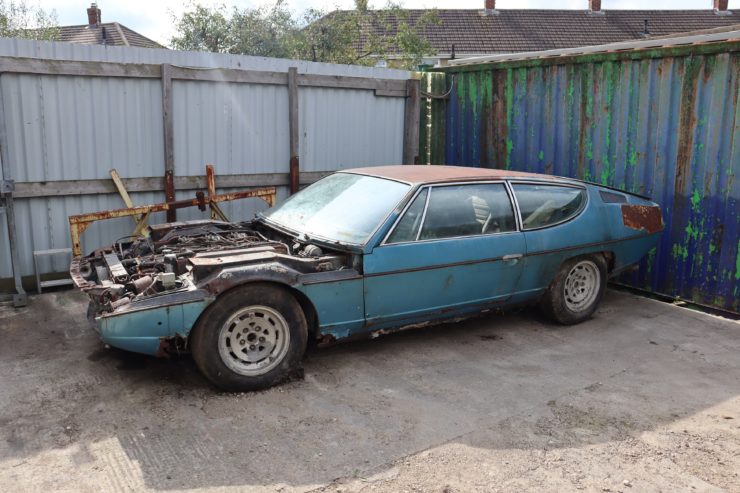 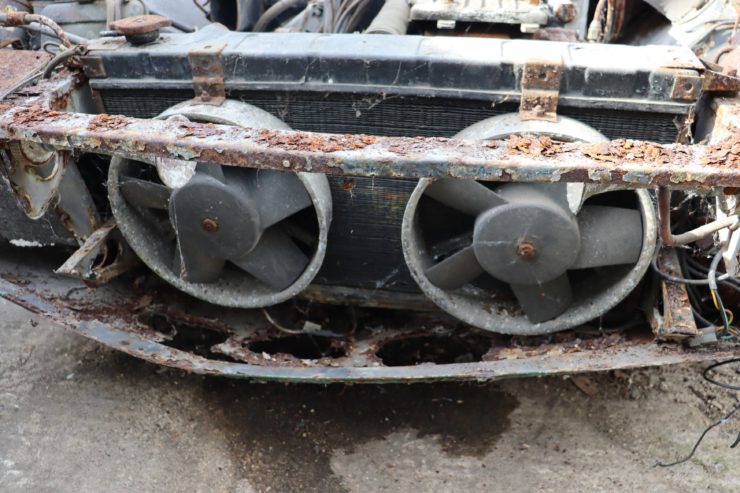 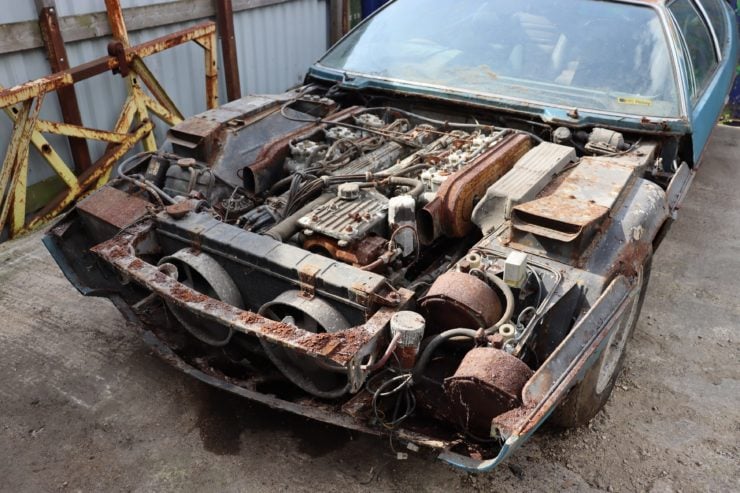 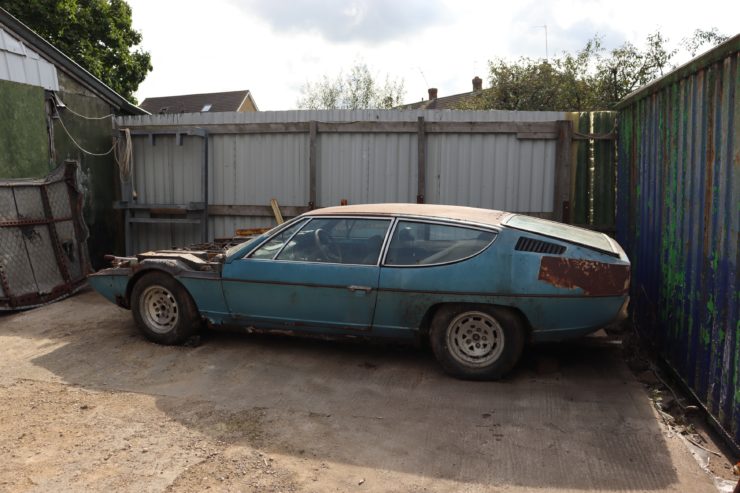 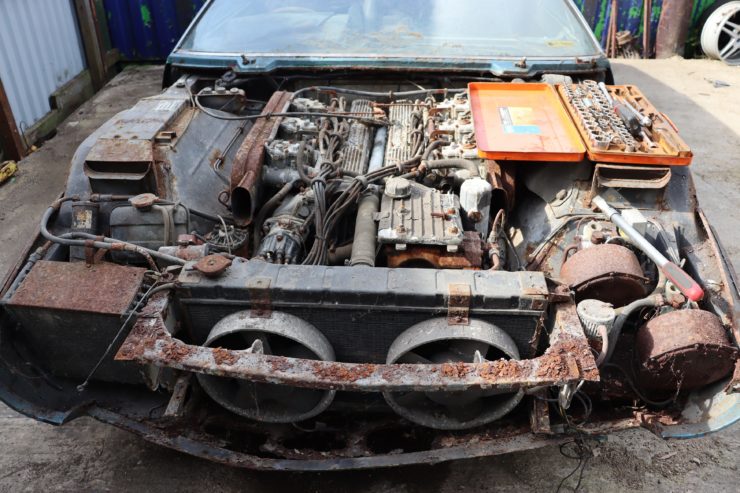 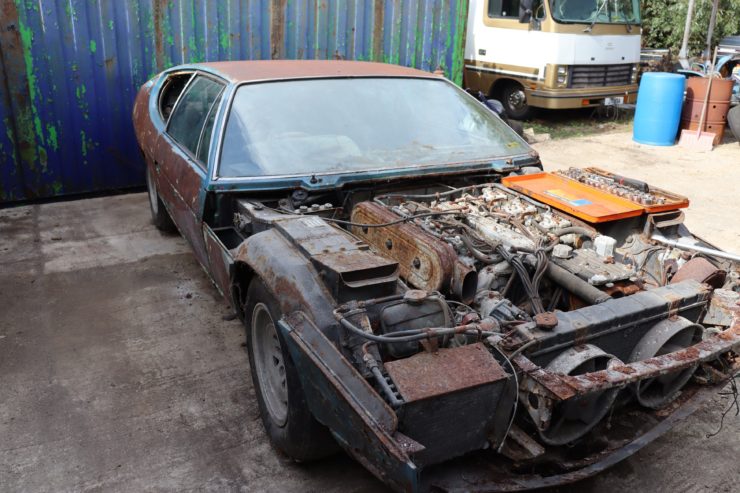 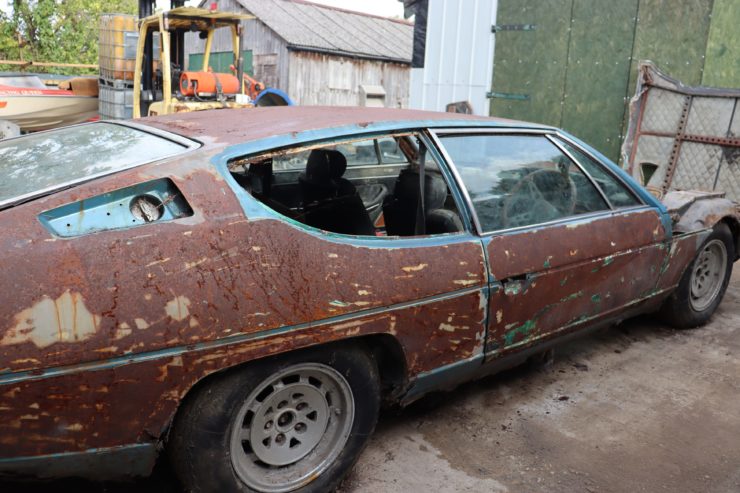 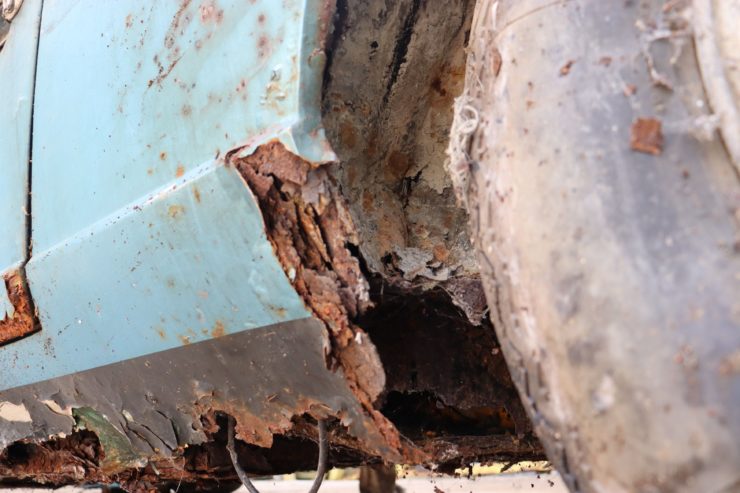 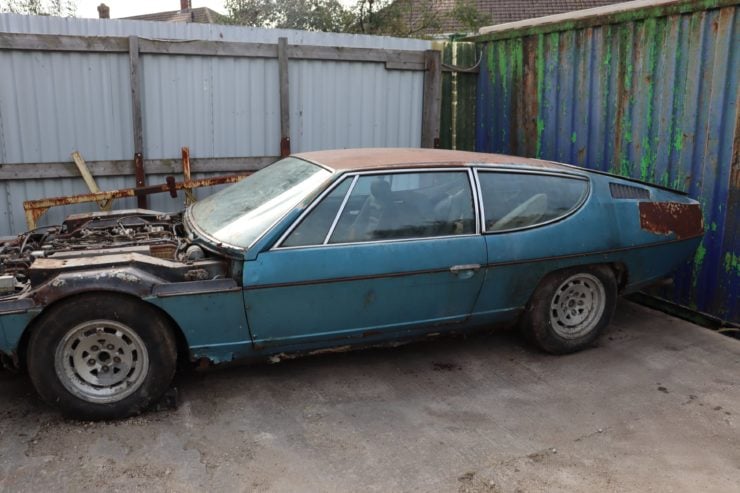