This is Hell’s Chariot, it’s a 1949 Mercury Custom Coupe and it’ll be immediately recognizable to anyone who’s seen the 1978 smash hit film Grease starring John Travolta and Olivia Newton-John.

Hell’s Chariot was built by Eddie Paul (of Customs by Eddie Paul) to be the signature car driven Leo “Crater-Face” Balmudo, the main rival of John Travolta’s character Danny Zuko. The two men have a memorable race down the Los Angeles River, between the First and Seventh street bridges.

The 1978 film Grease remains one of the most enduringly popular family-friendly films from the 1970s. The film actually started out as a Broadway musical in 1971 before being converted into a film and given a cinematic release.

Above Video: This is the famous race scene from the 1978 film Grease, shot in LA between the First and Seventh street bridges, featuring Hell’s Chariot and Greased Lightnin’.

Without going too deep into the plot, the film is a story about a greaser named Danny Zuko (John Travolta) and his Australian love interest that he met over summer holidays named Sandy Olsson (Olivia Newton-John).

Grease is packed with memorable music and quotable quotes, though perhaps the most memorable part of the film is the race between Danny Zuko and his arch nemesis Leo “Crater-Face” Balmudo. Zuko is driving “Greased Lightnin’” and Balmudo is driving he car you see in this article, “Hell’s Chariot.”

The film would ultimately gross over $396 million worldwide, and in 2020 the film was selected for preservation in the United States National Film Registry by the Library of Congress as being “culturally, historically, or aesthetically significant.”

The script for Grease called for a number of custom cars to be made, the two most important were Greased Lightnin’, which was to be driven by Travolta, and Hell’s Chariot which would be driven by his key rival. 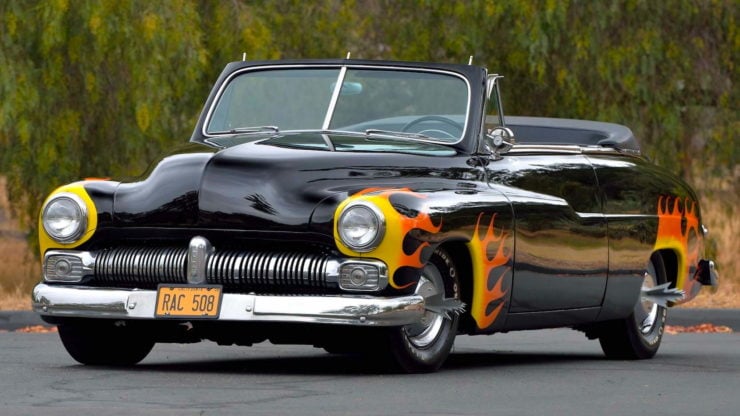 There can be little doubt that Hell’s Chariot is one of the most famous cinema cars of the 1970s, and it’s instantly recognizable to anyone who remembers the film.

Hell’s Chariot started out as a relatively standard 1949 Mercury Custom Coupe, it was acquired by Eddie Paul of Customs by Eddie Paul who was building the cars for the film.

Paul would chop the roof off to turn the car into a convertible, he also added flames front and back over the black paintwork, and those famous hubcaps with blades on them that spun as the wheel turned.

The car is powered by a 255 cubic inch flathead V8 engine and power is sent back to the live axle rear end through a column-shifted 3-speed manual transmission with Touch-O-Matic overdrive.

Hell’s Chariot would end up in private hands eventually, after it had also been featured in the films “Streets of Fire” (1984) and “Used Cars” (1980). Later in its life it would also appear in the TV show “Americarna” (season 2 episode 7 entitled “Million Dollar Movie Cars”) as well as an episode of the TV series “Pawn Stars.”

The car is now due to roll across the auction block with Mecum in mid-August, if you’d like to read more about it or register to bid you can visit the listing here. 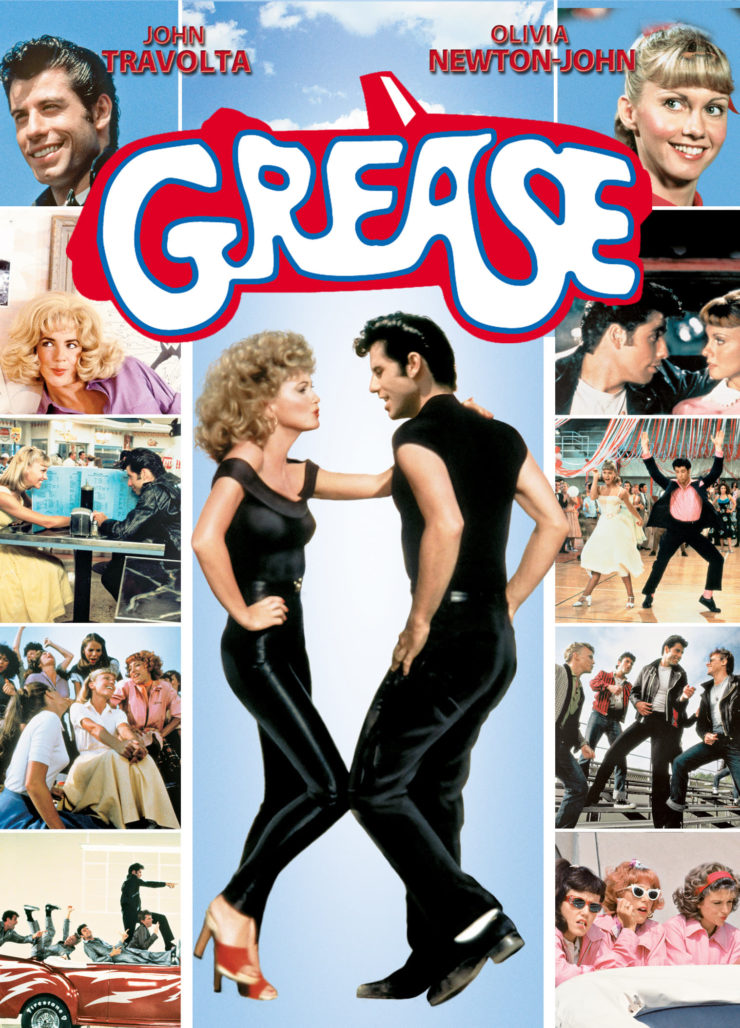 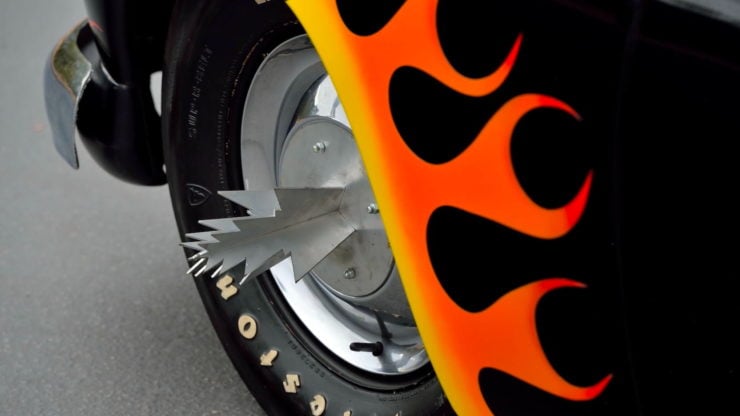 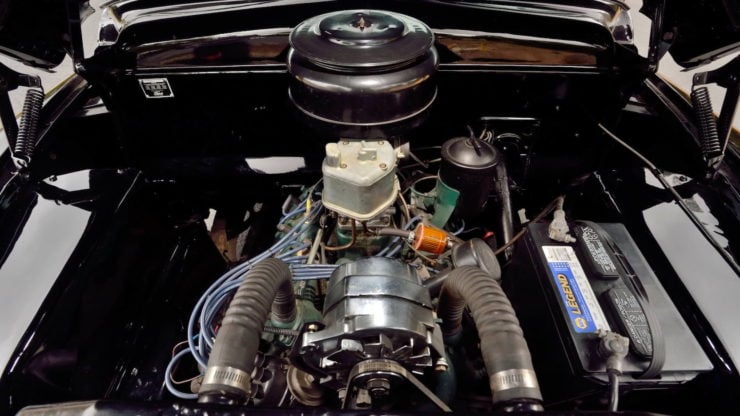 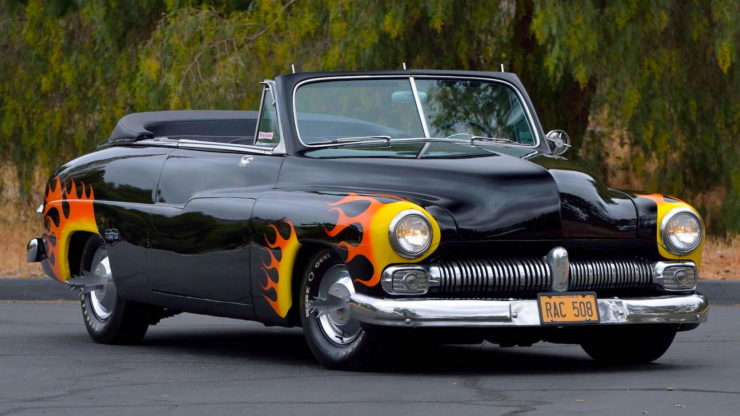 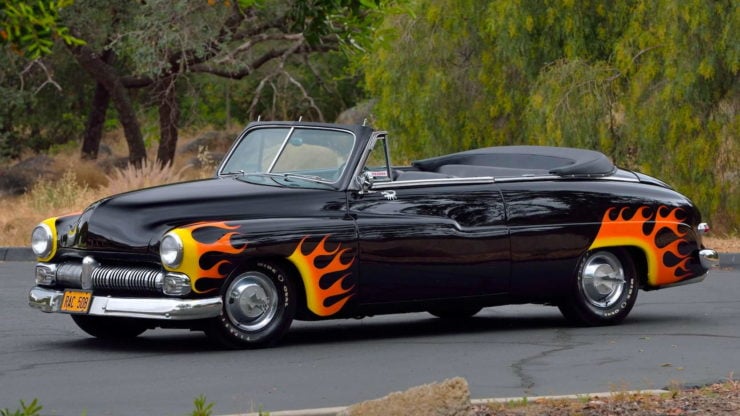 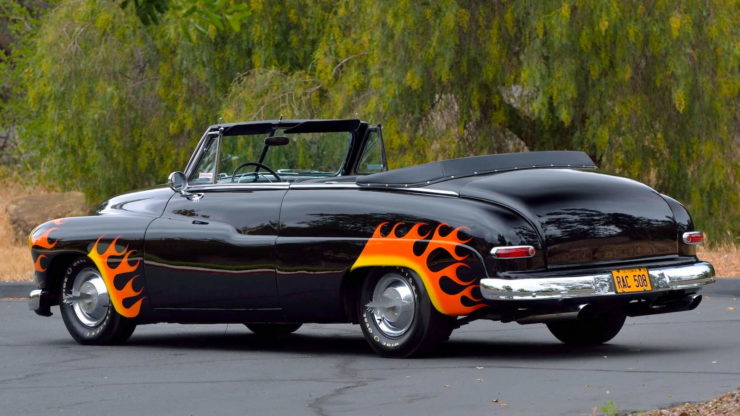 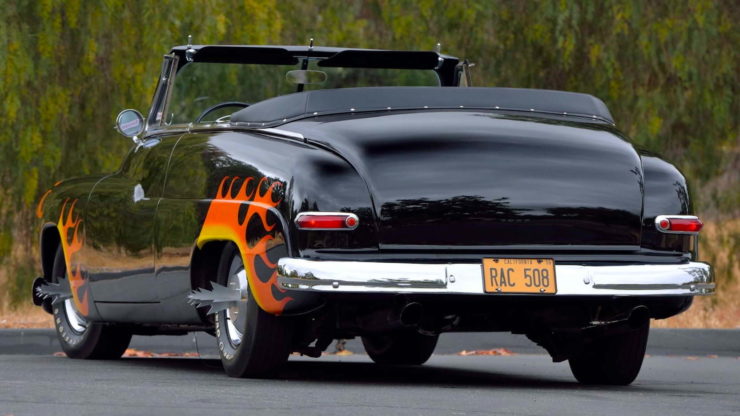 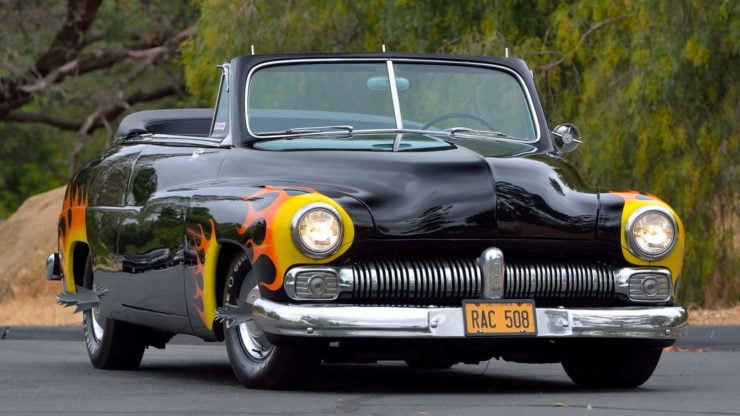 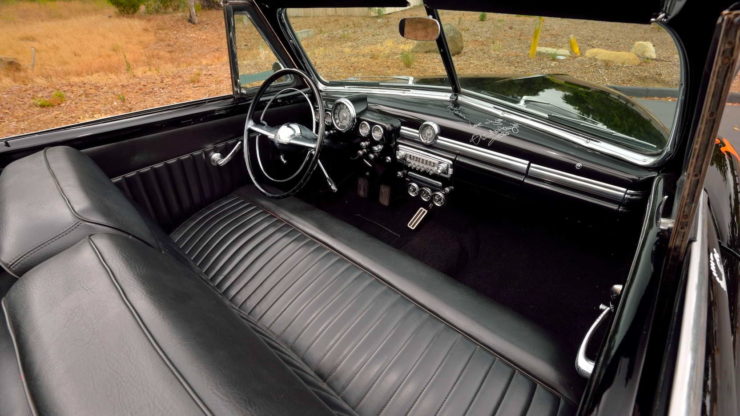 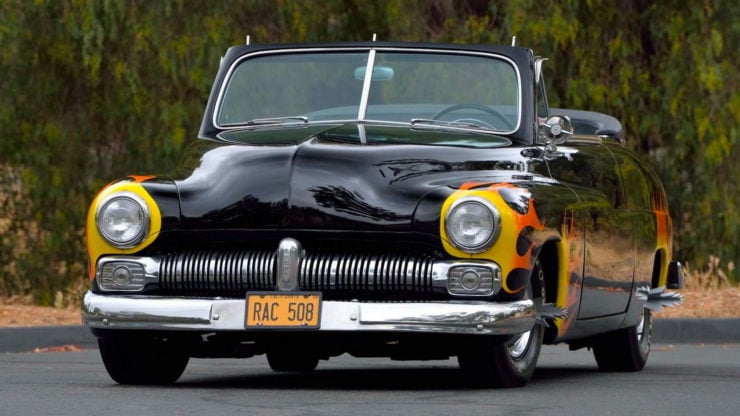 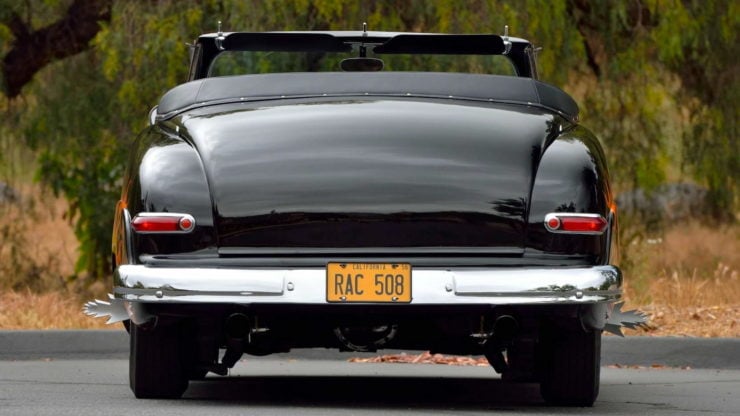 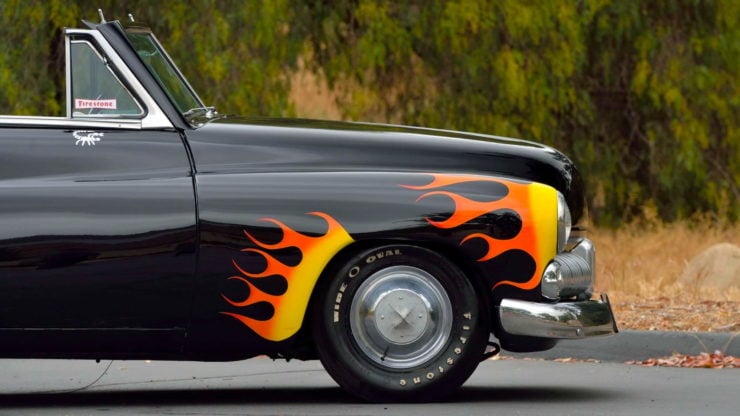 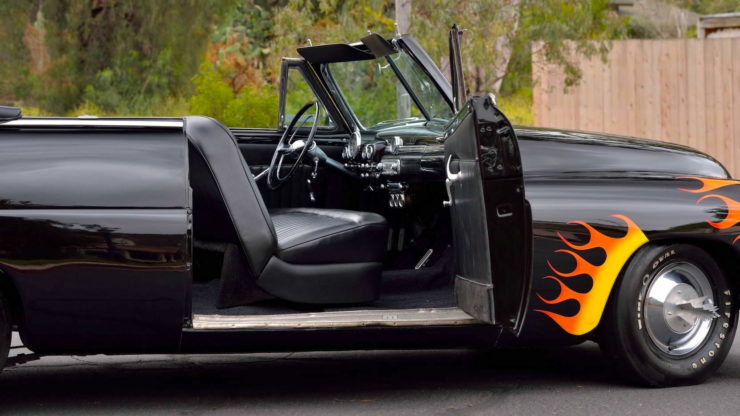 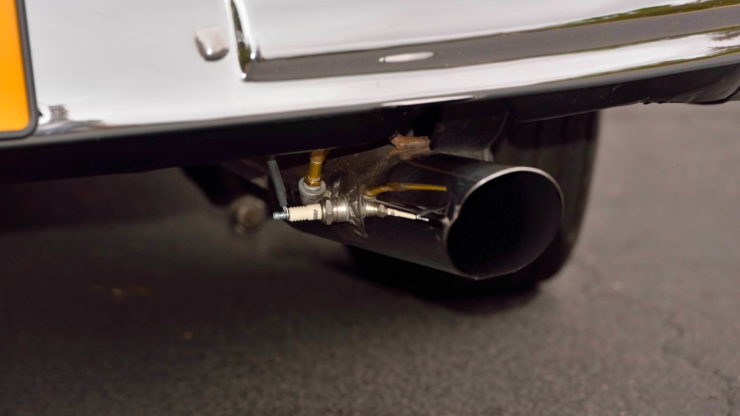 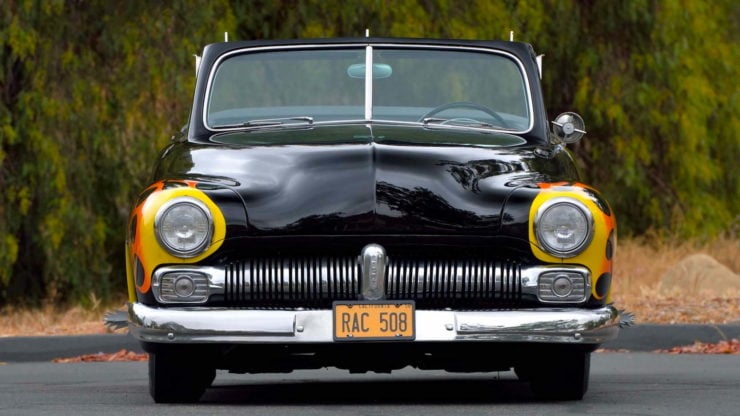 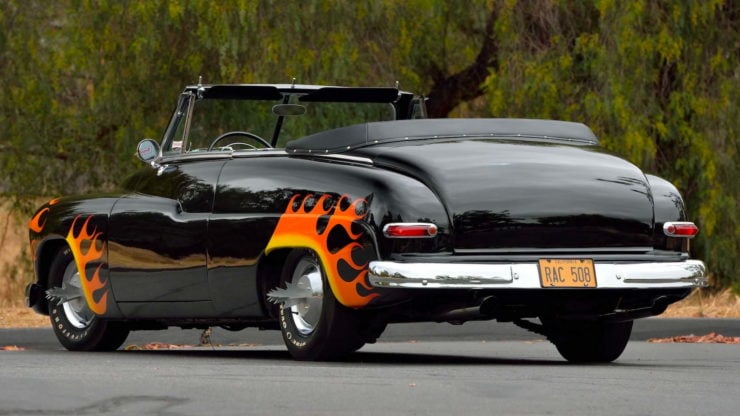 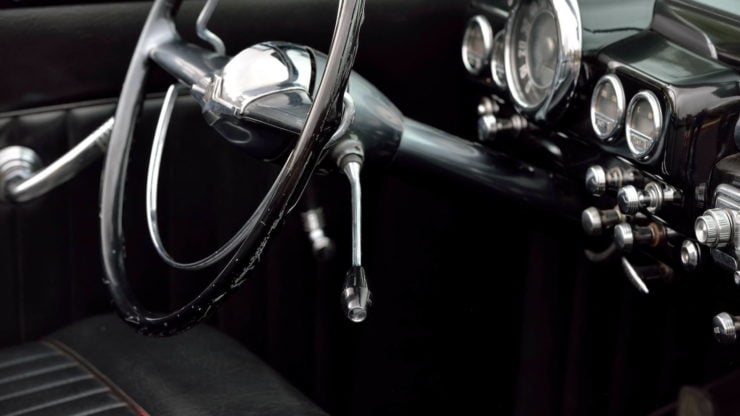 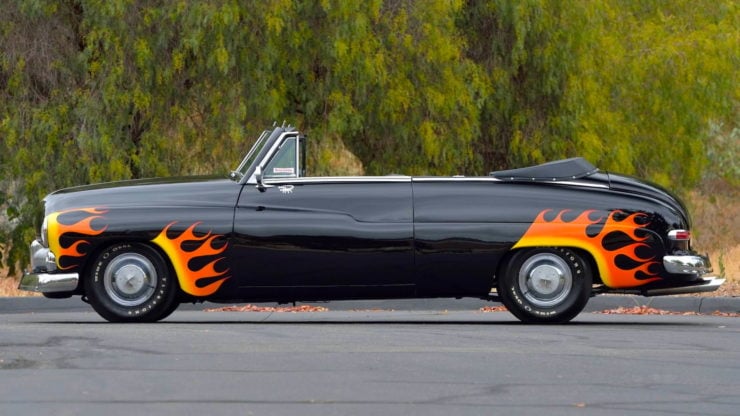 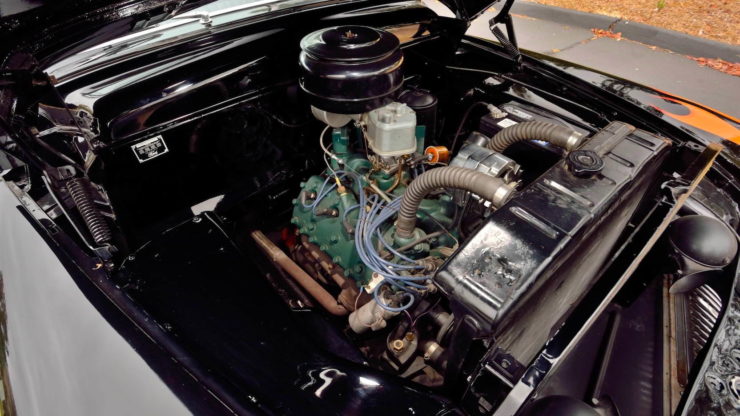 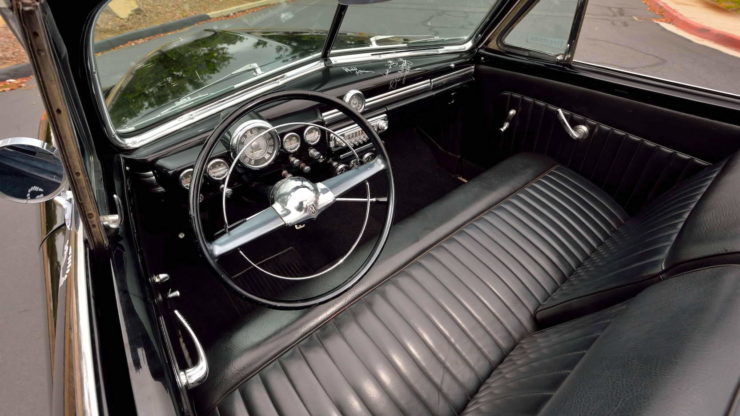 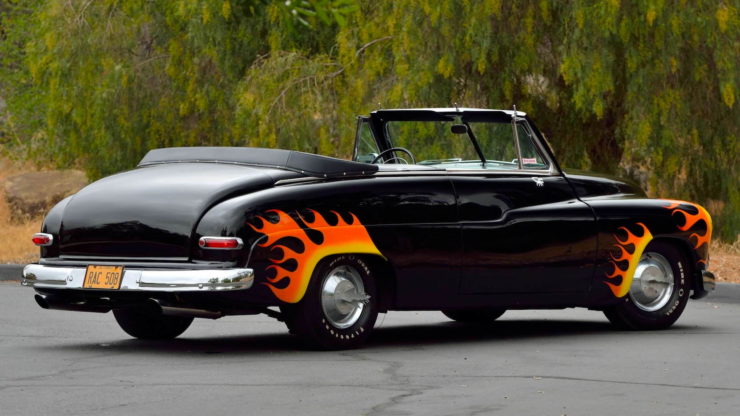 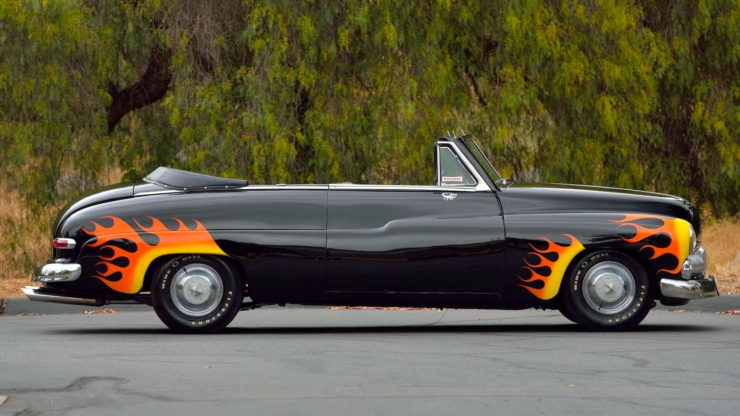